My defenses clearly down after enjoying my first round of DC’s current major crossover event Future State, I decided to get back in the ring, bob and weave around a few more titles, and not hold any punches discussing Future State:Kara Zor-el SuperWoman #1, Future State: Catwoman #1 and Future State: Immortal Wonder Woman #1.
Whilst running out of misfired boxing metaphors, let’s make it a TKO discussion on three new titles!(TKO is being knocked down three times in the same round, and I’m talking about three titles.Oh yeah, the cleverness continues to astound…). 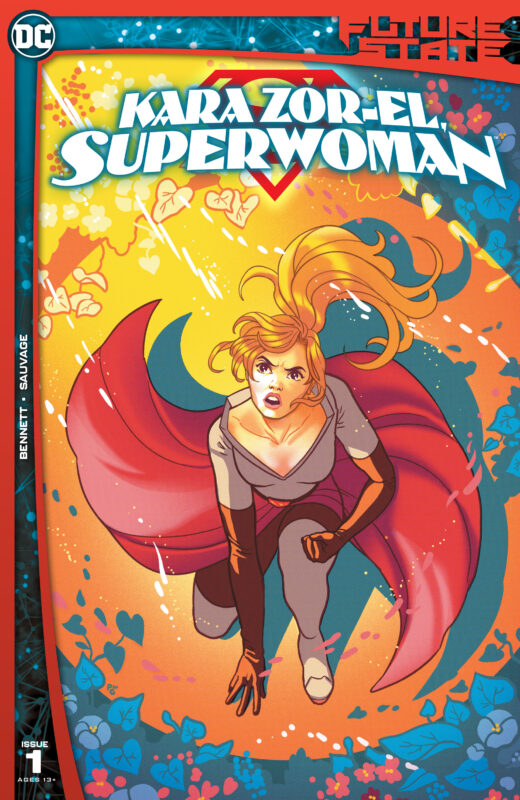 Future State:Kara Zor-el SuperWoman #1 has Kara Zor-el as a self-imposed “Guardian of the Moon Colony”, a safe haven for the lost and disenfranchised originally from Earth, then seemingly to other wayward travels across the cosmos.Reflecting on her life and how she should have been the protector of Earth, though her cousin arrived first and took on the mantle only to pass it down to his son, Kara has now created a peaceful, Zen like existence dedicated to helping the citizens of the moon colony (whether they are grateful or not) and carry out a dedication to non-violence and non-aggression.

A surprise visitor, Lynari Lilli’alo of the Starswamp Asteriod, crashes onto the Moon Colony looking for a refuge from her descendant’s blood feud.Kara tries to teach Lynari the ways of service, non-violence and gratitude, using the lessons she learned from the now deceased Krypto the Superdog as her spiritual guide and life example (without drinking from a bowl on the floor, I am sure).

Written by Margueritte Bennet (DC Bombshells / Batwoman) with art by Margueritte Sauvage (DC Bombshells / Faith),Future State:Kara Zor-el SuperWoman #1 is a creative take on a coming of age / mentorship story with a range of characterization, believable personal growth, and the lingering of self-doubt and negative self-speech.There is a softness to the colour palette helping create a water colour look to the book which can be unexpected for a superhero-in-space story, yet fits the aesthetic of a peaceful moon colony and creates a unique initial emotional impact for the reader.

At first glance, I suspected it was more of a YA oriented Superwoman story.After actually reading the story,Future State:Kara Zor-el SuperWoman #1 is a creative take on a superhero redefining her life’s role and how she fits into the life she has been given. 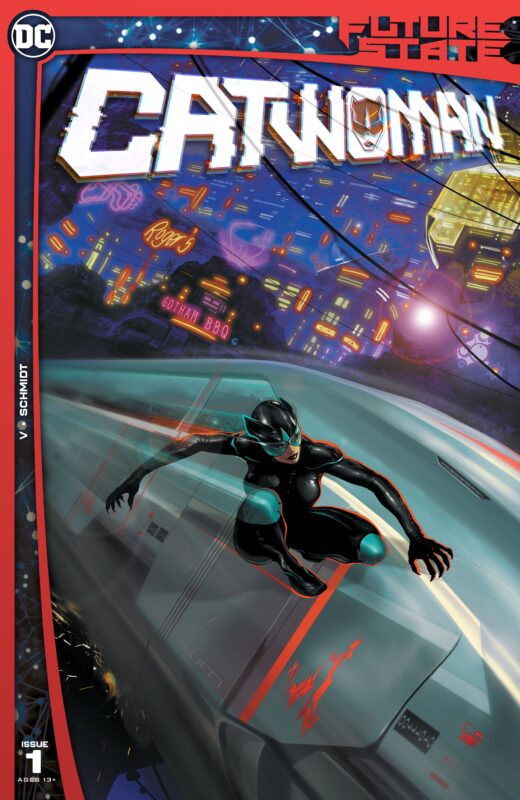 Selina Kyle finds herself attempting to steal a train containing youth who are being sent to Whiteport Reformatory as the Magistrate, Gotham’s Orwellian private security company, attempts to create “productive, law-abiding citizens” and squash an underground resistance movement.This train, however, has more precious cargo that is Selina Kyle’s true prize.

Written by Ram V (Catwoman / Justice League Dark) Future State: Catwoman #1 reads as a fast-paced heist movie with expected twists and turns and unexpected cameos.Otto Schmidt’s art (Green Arrow / Harley Quinn) plays well with various panel layouts and backgrounds creating a consistent building energy to the story, and an appropriate use of a “digital sheen” at points to create a futuristic, though still realistic, look.

Future State: Catwoman #1 builds upon events in other books (notably Batman) while creating questions for readers that, I am sure, will be solved over the course of time. 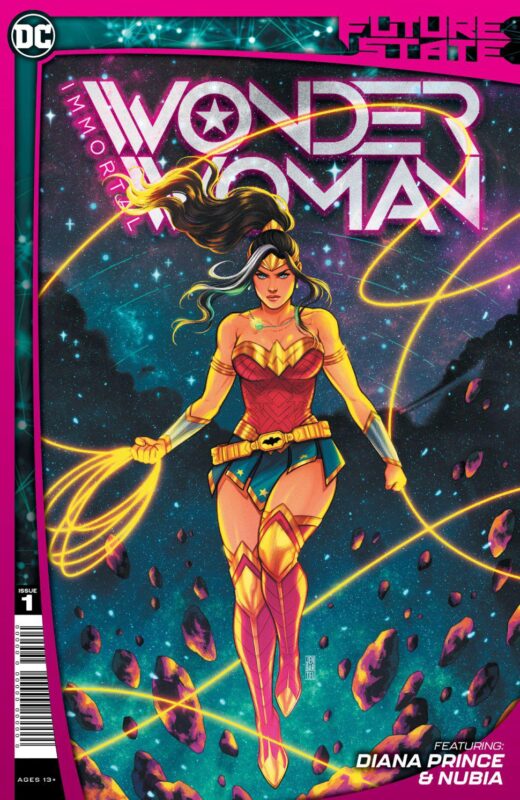 Diana Price, the current DC Universe’s universal Wonder Woman, is being held to a difficult decision to either leave the “terminal planet” of Earth behind, or stand ground and fight the “approaching evil” making its way to the watery blue planet.It seems the Amazons of Themyscira have seen a warning in the stars of an evil which needs to be stopped.Diana is convinced they need to leave as the Earth has become uninhabitable.

On Apokolips, Darkseid is witnessing the destruction of his planet by an attacking evil and, instead of defending his fiery torturous home, he simply, and quite boringly, leaves, deciding to come back to Earth and take another crack of subjugating this planet.Is Darkseid the evil Themyscira is waiting for, or could it be the evil eating Apokolips?

Writers Becky Cloonan (Gotham Academy) and Michael W. Conrad (Doom Patrol) set-up interesting parallel problems for our story’s two protaganists (and yes, I consider Darkseid to be a second protagonist in this story as he is the driving force of his specific story) while creating questions for the readers regarding the fate of our characters and, indeed, Earth itself.

Jen Bartel’s (Harley & Ivy Meet Betty and Veronica) art transitions well between the “lightness” of Earth and the “darkness” of Apokolips having a creative balance of “standard” comic rendering with a touch of a “cartoon” edge.Any artist who can also effectively draw Darkseid looking bored on his throne is a winner in my books!

The second story, Nubia in Future State, follows Nubia as one of the last remaining Amazons on Earth, now taking the mantle of Wonder Woman, thwarting a museum heist in Atlanta then having to discover the secret behind the wanted artifact.Nubia seeks the advice of her aunt who, as one could guess when dealing with goddesses-like warriors from an undiscovered island and ancient artifacts, has connections to magic and, quite possibly, immortality…or at least extremely slow aging.

Nubia, as I learned through a bit of Google research, is in fact Diana’s “twin sister”, created from black clay, in the same manner as Diana Prince was created from white clay, by Hippolyta.Nubia made her first appearance in Wonder Woman #204 in 1973, and has made appearances throughout the years in retcons and reboots.

It is great to see diversity in the Wonder Woman title with the creation of new characters and reinstating past characters.With the first Brazilian Wonder Woman (Yara Flor) as part of Justice League and in her own upcoming series, and with Nubia now a Wonder Woman proper and not a foil character, it is wonderful to see DC tapping into various vast histories and cultures and how the ideals of Themyscira helped inspire culturally rich heroes, and warriors, worldwide.

Celebrated YA author LL McKinney (writer – Nubia: Real One),Alitha Martinez (pencils – Batgirl), Mark Morales ( inks – Justice League), and Emelio Lopez (colours – Detective Comics), create a well-balanced story between character story arcs, backstory and action sequences with well rendered dynamic poses and varying panel layouts.(I’m trying not to comment on Wonder Woman’s hair in this review, but it is epic and adds another focal point for movement and action!Seriously.)It is also refreshing to see an entire team working on a title with each specialist brining their specific talents to the page!

One of the main aspects of Future State I am enjoying is the severed timeline from story to story.As readers travel from comic to comic, we are jumping in to contrasting salient points in the characters’ histories at times showing us what is happening to the future of a character in one story while we are still reading their “present” in another story.It’s a bit like the Pulp Fiction of comic writing with less drugs, swearing, and feet.

After Reading All This:
Future State:Kara Zor-el SuperWoman #1, Future State: Catwoman #1 and Future State: Immortal Wonder Woman #1 continue to build upon the cannon of Future State stories in creative, fun-reading ways.I am optimistically curious to see how many of these Dynamic Changes (DC – get it?) will crossover into the present DC Universe!

**Head on down to Amazing Stories to grab these issues, and get ready for the next round of Future State comics**