DC’s Future State interpretation of “what the future could hold with heroes and villains from around the Multiverse,” (I could probably open to the front page and quote the actual introduction, but that seems like a bit of work right now…) has been a fun read giving readers a chance to see various versions of established characters and hinting, perhaps, of future DC titles and characters to come.
Let’s look at a few new releases, and a bit of a recap, with Future State: Suicide Squad #1, Future State: The Dark Detective #2, and Future State: The Next Batman #1 and #2.
Let’s get back in the ring to take another swing and see what the future (state) holds! 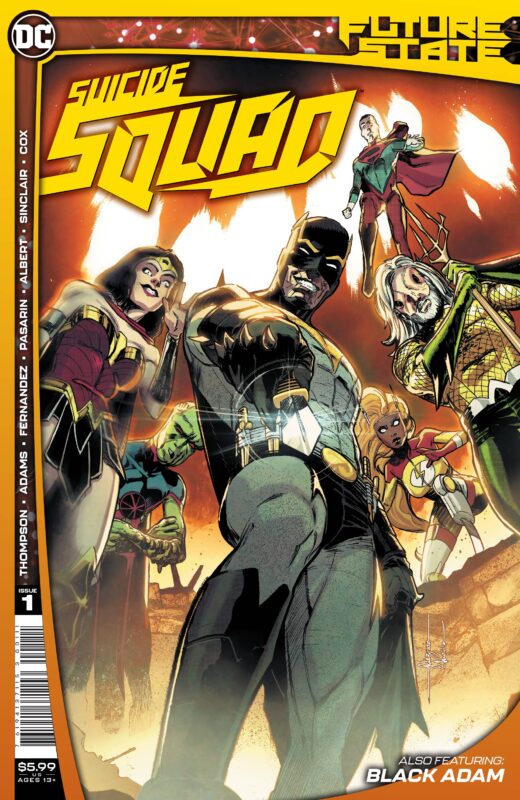 During our time in isolation, I decided to spend “a few hours” organizing my comics.Two to three weeks later, I was finished…well, mostly…though it is much more organized for sure!As I went through back issues, I was reminded I was quite the Suicide Squad reader back in the day and was keeping up with much of the new story line until a couple years ago.When I saw the Future State: Suicide Squad cover, which apparently shows the Justice League looking not like their naturally sunshiny selves, I decided to check out their Future State!

On Earth 3, Amanda Waller (yes, that Amanda Waller) has created the Justice Squad to defeat supervillains, to eliminate crime, and to follow her bidding under the derision of exploding neck implants she controls.The Justice Squad, consisting of Earth 3’s Superman, Batman, Wonder Woman, Aquaman, Martian Manhunter and the Flash, are not exactly as they first appear.Dealing with their role as Justice Squad members, each member is quickly established with their perceived role in the Squad, their developing self-awareness of who they want to be, and their subjugation to the always direct-speaking, and direct-acting, Amanda Waller.While completing their current mission, it turns out they are being observed in the shadows.Who, or what, could be following this Justice Squad?

Future State: Suicide Squad will be appreciated by Suicide Squad fans with its true-to-the-original tone and a throwback or two for good measure.If the Squad is not your thing, you can spend your money on a different Future State story…. like The Dark Detective, perhaps…

The second story, Future State: Black Adam, is brighter and bolder, with increased detail reminding readers of a story that is closer to a secondary story in Crisis in Infinite Earths, with modern digital colouring touchups.On Watchtower Mogo / 853rd century, the Justice Legion watch as a golden Superman Prime, complete with a Green Lantern ring, is overcome by the Unkindness, a conglomeration of the Seven Deadly Sins accompanied by the Last Lords of Chaos to destroy all existence in all the known universe as such evil, powerful entities are want to do.

The Unkindness, though represented quite fearfully in the artwork, has a name which doesn’t really strike fear into this reviewer’s heart.Maybe if the Justice League / Legion brought out a giant Buddy Bench for the Unkindness to sit on, the Unkindness would become the Kindness and all would be made right in the universe.Just putting that out there…
How can the Justice Legion (or Justice League, Superman refers to them by both names…) stand against the Unkindness as they witness hero after hero and team after team fall to its might?Wonder Woman has an idea who may help, someone who may perhaps still have a connection to magic though magic appears to be long forgotten to the annals of time across the universe.

(Speaking of time, there is a bit of a timeline issue that wasn’t addressed in the book, though it may be coming to issue two…or doesn’t need to be explained…. or I’m just being picky…)

Future State: Black Adam is well enough of a read with a bit of exposition dumping near the end.A concluding twist cameo sets up an interesting team-up for issue two!
Both stories are decent reads over-all hitting the right tones for a Suicide Squad / return of Black Adam story!. 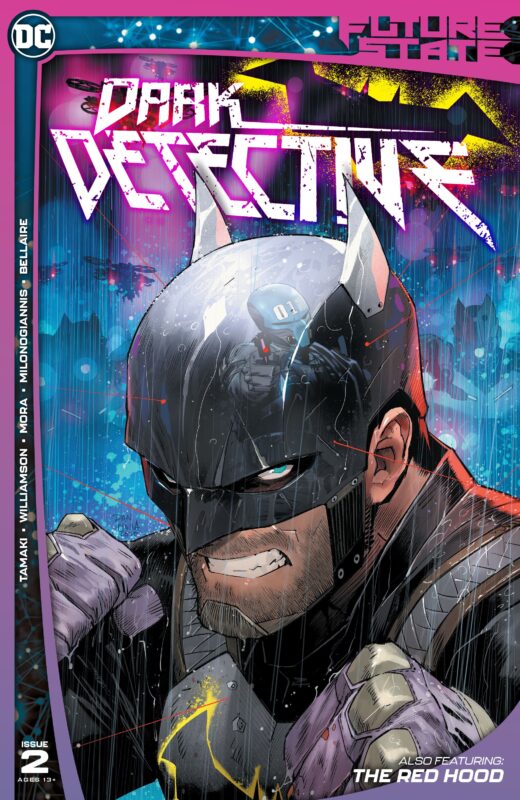 Future State: The Dark Detective #2 opens with Batman (the “Bruce Wayne” Batman even though both identities have been publicly announced dead) taking on Magistrate officers as they are “apprehending” a small group of teens in their misguided, warehouse robbery on the dock (unless you have your own warehouse or gang on the dock, it never works out).Readers learn more about the severity of the Magistrate’s tactics, and Wayne recollects the moments that have brought him to this present moment, including the attempt against him from, no other than, Peacekeeper 1, the baddest district Peacekeeper of all the district Peacekeepers.(Gotham, as mentioned across the two Future State Batman titles, has been divvied into districts where each district, besides having the Magistrate officers, is under official jurisdiction of a district overseer.)

The story follows a classic Batman-esque storyline where he has an actual mystery to solve; in this case, the source of the Magistrate’s power and the extent they will go in the name of “justice” while showing Wayne’s new meager lifestyle and his new, conspiracy-minded, roommate.Written by Mariko Tamaki (Wonder Woman) with art by Dan Mora (Batgirl), Future State: The Dark Detective #2 is a tightly written story with more introspection and character building than Future State: The Dark Detective #1 with elevated writing and dialogue.Mora’s art is spot on for this story using a mix of a futuristic / grounded in reality aesthetic, dynamic perspective work, and creative panel layouts.

I enjoy the scaled down, bare bones, riding-a-used-motorcycle living-in-someone’s-basement Batman.Batman’s mortality has always made him an outlier character among his “super-friends” so seeing him working without the aid of his mansion and gadgets is a strong choice while also keeping with the current Batman proper storyline.

The seemingly untitled backstory (if I was a betting person, it would be along the lines of Future State: Red Hood – “Mask Alert!”) has the Red Hood and Ravager working as bounty hunters, using radically varying tactics, to bring in masks for the Magistrate.As they follow leads involving an unlikely villain, matters take a turn for the worst, as they often do with antihero superheroes, leaving the duo with upcoming hard choices.
Writer Joshua Williamson (Batman) changes the story delivery from pages of non-dialogued action to plenty of dialogue amongst characters creating a good narrative flow by not relying on just one particular writing style.With art by the team of Giannis Milonogiannis (art), Jordie Bellaire (colours), and Alw’s Troy Peteri (letters) reminds me of a less detailed Akira with a slight modern animation edge, in a good way.
Also, Vigilante appears on page two, so that is rad!
A good second story with a solid conflict set-up cliffhanger ending! 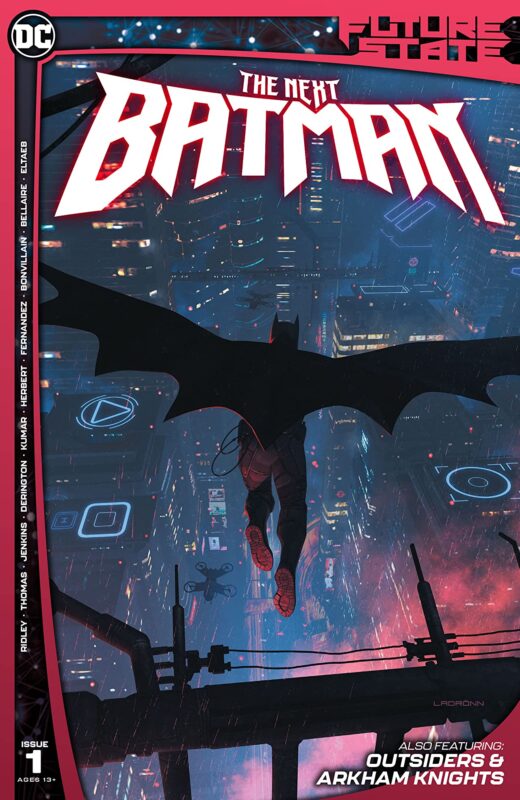 With a bit of hype that caught mass media pre-release of Future State, or at least online attention, was the addition of the first African-American Batman (one of the sons of Lucious Fox who is now in control of Wayne Enterprises and all its vast fortune)Tim / Jace Fox who now patrols the streets stopping crime while avoiding the totalitarian security patrols of the Magistrate.
Issue #1 establishes the premise of the Magistrate, as the first Batman book released in the series, and the “rules” of how this present Gotham works.In this story, Fox attempts to stop two teens who are trying to “blood in” to the Bane-litos, the ruling gang of Little Santa Prisca Neighbourhood, while navigating his own trials being “let in” his own family.The art by Nick Derington (Doom Patrol) fits the tone of a crime comic using bold, solid colours and line work.There is even a great homage panel to Batman Year 1 on page 4!

DC Future State: Outsiders (Brandon Thomas – writer / Sumit Kumar + Raul Fernandez – art / Jordie Bellaire – colours) follows Katana attempting to dismantle a Magistrate stronghold and confront Kaliber, a traitor to the Outside resistance.In this future, the Outsiders are a resistance group acting out against the Magistrate who are literally outside Gotham limits, and outside the Magistrate’s jurisdiction.A surprise ending cameo, and battle intervention, reveals information that could have severe consequences for the Outsiders.DC Future State: Outsiders helps in Gotham world-building and brining in notable secondary characters.

The third story (also helping to justify the $7.99 price tag… in American dollars!), Future State: Arkham Knights: Rise, introduces Astrid Arkham as the leader of super team comprised of escaped “patients” from Arkham Asylum including the likes of Two Face, Victor Zsasz, Dr. Phosphorus, Humpty Dumpty, and Clay Face.Astrid is sincere regarding her mission to build a team to fight the tyranny of the Magistrate taking the role of an Arthurian type leader with her knighted look, complete with full-body armour, shield and sword, and talking to her team with a respectful command, referring to each member of her team as “Mr. Dent” or “Mr. Zsasz.Astrid sees her Arkham Knights as “the light in the darkness,” a redeemable team who are “the protectors of the wasteland.”Of course, when a team is comprised of (ex)-villains, their means of justice are notably darker than the Justice League.The Arkham Knights are also using the abandoned Wayne Manor as their team base.I’m guessing they didn’t purchase it, but I could be wrong…

I enjoyed the premise of the “redeemable” villain story.True, there is an element of the “lovable villain” in Suicide Squad,though the Squad is either competing for power, serving their own agenda, or just trying to earn their “get out of a maximum security super-powered jail card,” whereas with Arkham Knights, this team has a leader who is convicted to her goals, convicted to her team, and convicted to Gotham.The Arkham Knights led by Astrid Arkham – the driving force and heart of the team – is a group I would enjoy seeing more either used as a secondary team, or in their own regular title.

Issue #2 gives readers the first unmasked look at Jace in his Batman suit, while taking a breather from a Magistrate chase,and gives a deeper look at the politics behind the Magistrate and the powers-that-be who are letting, and wanting, it to happen.Meanwhile, Jace stops an attempted murder which creates philosophical pondering behind the justification of people’s, including his, motives.

The secondary story, Batgirls, follows Cassandra Cain being voluntarily captured in an attempt to rescue, which is guessed, to be the missing, presumed dead Batman, and the third story involves Birds of Prey’s Poison Ivy, Catwoman, and new found robot companion Dee-Dee attempting to “whistle blow” corruption charges against a technology mogul.

After All That Being Read:
DC’s Future State continues to be an enjoyable read!The Batman titles are consistent in quality (with The Dark Detective becoming a strong competitor as a series front runner!) and Suicide Squad is definitely a read for current Squad fans!

**Head down to Amazing Stories and catch up on these, and the latest, FutureState stories**