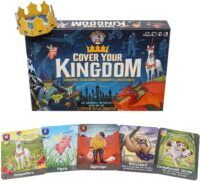 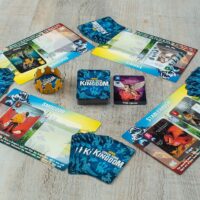 For more information go to Board Game Geek

Cover Your Kingdom is an absurdly ruthless set-collection party game for 3-6 players ages 9+. The game’s cutthroat mechanics which make the game a highly-addictive riot-inducer are blunted by the punderfully-whimsical theme.

The pace of play is fast, with very little downtime, as interactions may occur involving any player at any moment keeping all players on the edge of their seats and prompting loads of impish banter, gloating, and murderous glares. due to its competitive nature, it might not be the best choice of game if you’ve got a table-flipper in your group.

However, as long as everyone has a good (or evil) sense of humor, the game will take you on a boisterous ride you’ll want to repeat. Cover Your Kingdom is an excellent game for building relationships… or ending them. (Perfect for family reunions!)

In Cover Your Kingdom, you and your rivals will each become Rulers of your own fantasy Kingdom. Regrettably, the Kingdoms are creatureless and vacant, and no creatures means no magic. To remedy this problem, you’ll contend with the other rulers as you try to convince lengenderpy Creatures (such as Pigxies, Hentaurs, Uniquehorns, and Sighclops) to join your Kingdom.

You can add them to your Kingdom by forming clans of two matching creatures (or one paired with a Wild Creature), or by recruiting (ahem- stealing) Clans from other Ruler’s Kingdoms. Each Creature is worth a certain amount of Magic. The Ruler with the most Magic in their Kingdom at the end of the game wins.

Kingdoms are divided in two different regions, the Mountains, and the Valley and most creatures will only live in one region or the other.

As Clans are acquired, they are stacked one atop the other offset by 90 degrees. Each Ruler’s Kingdom mat indicates where each kind of Creature may be placed. Only the top Clan in each stack is vulnerable to being recruited by rival Rulers and each new clan you add is an added layer of defense to those beneath it (yes, Clans are layered, like ogres).

To attempt to recruit another Ruler’s Clan, you may show a matching Creature, or a Wild Creature from your hand. Your rival may counter with a Creature of their own, to which you can respond again. This continues until one Ruler cannot, or chooses not to respond.

The winner takes (or keeps) the Clan adding ALL Creatures used to recruit or defend it. This increases the Clan’s value (sometime’s drastically) and its allure to other Rulers and if they have the opportunity the will try to swipe it for themselves.

The hook of the game lies in its ability to conceive a roller-coaster of emotions, with bursts of elation and despair occurring repeatedly for each player throughout the game. The actions you take, and the order in which you take them, on your turn can have a tremendous impact on your success or failure.

The end-game is also super intense, as the outcome of the entire game can often be decided in the last few turns, or even with the final card played. It’ll keep you all on the edge of your thrones and also make it difficult to put away without “just one more round”.

Cover Your Kingdom is as fun (and violent) as the people you play it with.

Be the first to review “Cover Your Kingdom” Cancel reply