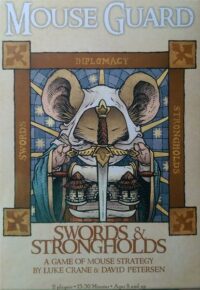 A light strategy game for two players, from the setting of the Mouse Guard comics and roleplaying game.

Each player control four mouse pawns on a gridded board. Play involves a deck containing three types of cards: Swords, Strongholds, and Diplomacy.

Each turn one mouse moves along a grid in one of the four cardinal directions and then may immediately use one of the cards in their 3 card hand.

Sword: Move in an L shape, pushing mice you encounter aside. Mice knocked off the board this way are captured and removed from play. You may not capture your own mice.

Stronghold: Leap off the grid onto an adjacent square. Mice may not enter grid corners touching your square. Mice currently in such a grid corner are pushed on space, and mice pushed into a stronghold are captured. This is called “building a stronghold”

Diplomacy: Choose the nearest enemy mouse:
•if they are in a stronghold, force them out of one and into an adjacent grid corner of your choice.
•if not, switch places with that mouse

Immediately after resolving a turn, draw cards if you are below the hand size of 3.

WIN: build a stronghold in one of the enemy corners (or, presumably, capture all enemy mice)