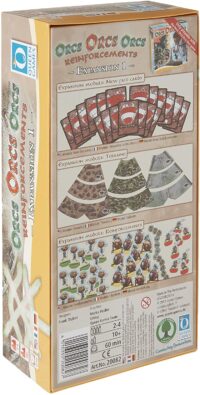 With Reinforcements players are getting three new modules that alter Orcs Orcs Orcs in interesting ways.

Three reptile creatures are joining battle with the orcs. At the start of the game choose with which you want to play and just switch them with one of the corresponding creatures of the basic game.

There are three terrain types coming with this module which will have different effects once a creature steps onto them. At the start of the game mix the terrain patches and put them randomly across the battlefield.

With the addition of the new fate cards things become increasingly more difficult for the mages to deal with the charging orc hordes. The most important rule change is that mages can now only attack creatures in the front lines, meaning the first creatures they see on their lane. So better secure the best spots on the tower. The new fate cards change the way creatures are moving towards the tower. They now move in packs and on specific lanes, rather than a whole category.