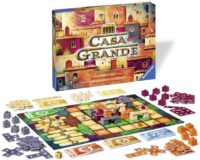 In Casa Grande players try to develop well-located building lots in order to construct large and tall buildings on them. Opponents can use your buildings for their own purposes, and the final result should be one large magnificant house – “casa grande” – after another.

Casa Grande is played on a game board that shows a square grid for the building area, which is framed by a track. At the start of the game, each player receives a number of building blocks and differently-shaped platforms. Each player also receives five bonus points and one pawn, which is placed on the track.

The game is played in turns with some elements being similar to Burkhardt’s own Kupferkessel Co. At the start of his turn, the player rolls the die and moves his pawn forward on the track as many spaces as the number rolled. By expending bonus points, the player may move his pawn further. Then, the player must place one building block on the board in the column or row corresponding to the space on the track where his pawn is located. If he now has the building blocks needed to support one of his platforms, he may place that platform on top of the building blocks. If he does so, he gains an amount of money (Casa Grande Lire) based on the size of the platform and the level at which it was built.

After a platform has been added, building blocks may be added on top of the platform. If another player builds on top of your platform, you gain a number of bonus points. You also gain bonus points if your pawn ends its move on a corner (in which you don’t get to place a building block). If a player accumulates nine or more bonus points, he receives nine Casa Grande Lire, but loses the bonus points.

The game ends at the end of the round in which a player has placed his last building block. The player who has collected the most money wins.