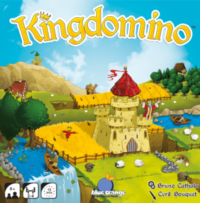 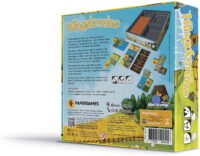 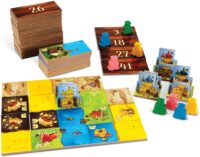 Dominoes with a kingdom building twist. Each turn, connect a new domino to your existing kingdom, making sure at least one of its sides connects to a matching terrain type already in play. The game mechanics for obtaining the tiles is clever: the order of who picks first depends on which tile was previously chosen. Make sure to secure tiles with crowns- these royal treasures help to multiply the worth of your kingdom at the end of the game! The game ends when each player has completed a 5×5 grid, and then points are counted based on number of connecting tiles and crowns

Be the first to review “Kingdomino” Cancel reply