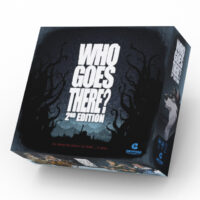 Who Goes There?: Second Edition

Who Goes There? is a cooperative game of growing paranoia. At the beginning of the game, all players are human and there is no reason not to trust each other completely, but as the temperature drops and mistakes are made, players start doubting everything and everyone around them.

You must build, trade, and upgrade to prepare yourself for the Antarctic Terrain, rabid dog attacks, crazed madmen…and most importantly, the alien entity that is now loose in the camp. Everything you build and upgrade has one purpose…keeping you alive and human! During the entire game, you will want to trade with other players and help each other build stronger weapons and better equipment, while also passing food and med kits around. Although, make sure your trust them, since trade is a huge opportunity for The Thing.

Staying inside may keep you from freezing to Death, but it won’t help you or your fellow humans win. The only way to secure victory is by venturing out of the camp! The problem with that is, being away from camp is the number one way to come across The Thing…leaving you vulnerable and exposed to infection. Whether fixing the boiler, repairing the door, or fighting the frigid temperatures outside, you will all need one another to survive. But trust is a hard thing to come by when you must be wary of…Who Goes There?

Be the first to review “Who Goes There?: Second Edition” Cancel reply