Growing up with comics, it stands to reason that one’s expectations and opinions change over time; that a series once enjoyed as a child may not hold up to the scrutiny of a mature eye. Conversely, (or Chuck Taylory…haha!…no? I thought it was clever…) there may be series that get overlooked during the height of their popularity due to the readers’ age or, in an over-justified move perhaps, not wanting to jump onboard as a fanboy wannabe. (Does the idea of a fanboy, in a non-gender specific fashion, exist anymore? Amazing with the success of comics in everyday pop culture, now that they are popular everywhere, comics fans seem less protective of their readership identity and commitment. Must investigate…) 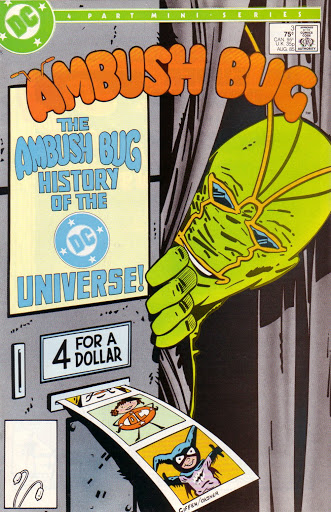 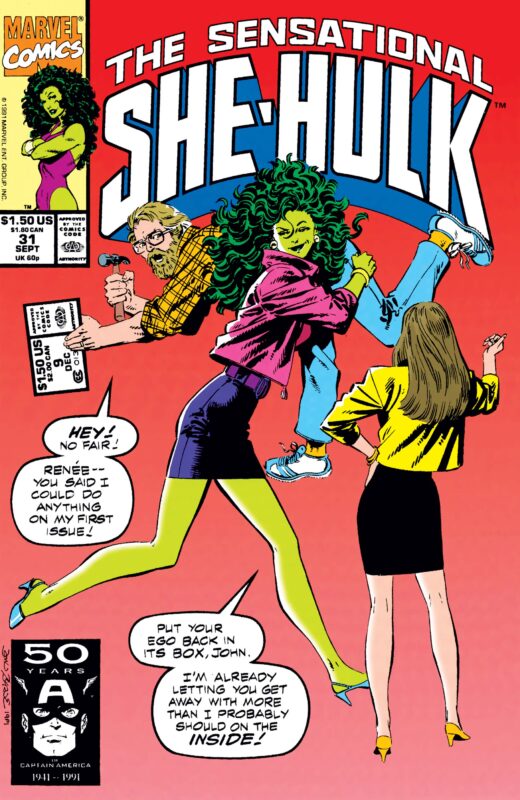 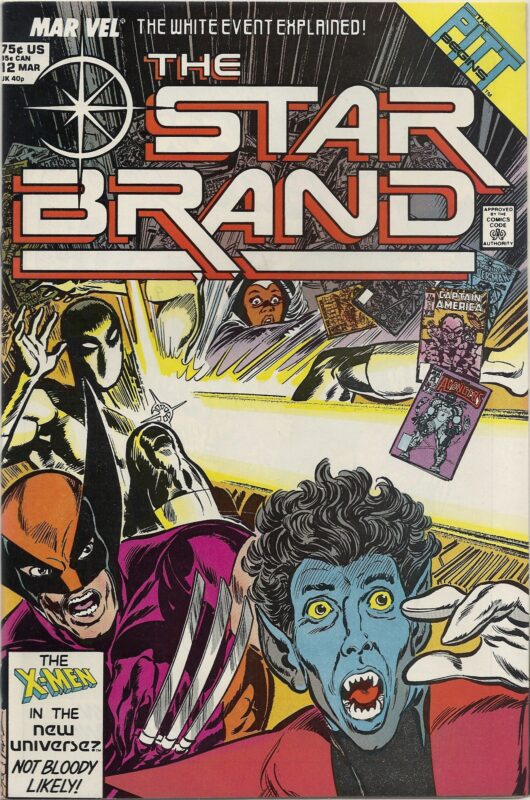 After revamping Superman in the series Man of Steel post-Crisis on Infinite Earths, Byrne returned to Marvel working on Star Brand for the New Universe and West Coast Avengers before starting his distinctive run on the Sensational She-Hulk.

Byrne’s version of She-Hulk was a departure from mainstream superhero books due its metacognitive aesthetic and complete self-awareness. True, other mainstream books had main characters who broke the fourth wall (this reviewer’s favourite Ambush Bug, for example) yet these characters were usually deranged or unreliable protagonists, characters who were in the fringe of their own respective universes, let alone as reliable character to readers. (The fringe, unreliable character element would be carried over in the early ‘90s Deadpool)

With She-Hulk, readers had a legitimate lead character superhero who not only talked to the audience, was aware she was in a comic, learned to walk between panels, physically tear apart pages to a skip ahead in the story and had an ongoing feud and “conversations” with John Byrne, who makes a physical appearance being carried away by She-Hulk on the cover of issue #31. 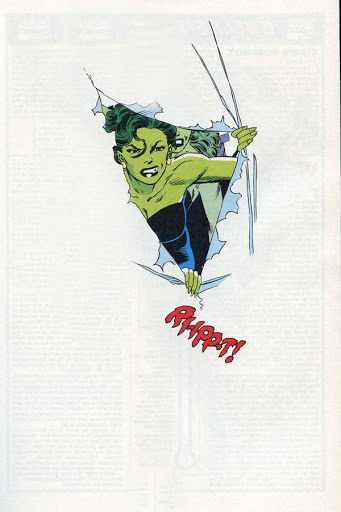 The fourth wall is broken in further extended ways, including other characters and villains, throughout the series. In issue two, page 16, She-Hulk is sitting whistling while the “attacking” Toad Men in the background are lounging around, casually bored, waiting while the sub-plot is being introduced on page 15. In panel two, noticing the audience is back to the main story line, She-Hulk says “Oh, you’re back…” and the battle instantly resumes in panel 3.

The self-awareness continued to transcend the lines of reality where, in issue #50, She-Hulk is reading proposed art work for the double issue, in the editor of Marvel Comic’s office, from proposed guest artists, including Frank Miller, where She-Hulk is interpreted in the artists specific style, while She-Hulk critiques the art whether it is fitting for her book.

As a teenage reader at this time I overlooked Sensational She-Hulk. Since she wasn’t a character I previously followed, I was discovering the world of indie black and white comics including the Eastman and Laird’s TMNT and the Canadian classic Reid Fleming the World’s Toughest Milkmen and, for complete transparency, all the villains she fought at the start were…well…kind of dumb.

If Doctor Doom would have appeared in the first few issues, I would have picked one up just out of interest. Instead, there was the Ringmaster and Dr. Nagan, a gorilla scientist with a human head, and that style of campiness just wasn’t of interest at the time. She-Hulk does reflect readers’ opinions by complaining of her lack of strong supervillains bemoaning the fact that she isn’t being given better crime fighting opportunities. (That being said, Mysterio did appear in issue #2 and it was pretty cool.)

That is where Sensational She-Hulk stands out. The title’s protagonist is fighting with elements she cannot control, including a boss she is constantly at odds with, who just happens to be the creator of her present reality. The tone of the series is fun with outrageous situations and premises, which in other comic would be laughable, are fun, enjoyable, and prosperous to the point of becoming believable; the more Byrnes and company throws She-Hulk into outrageous situations, the more plausible they seem.

Byrne did not write the entire run, launching the first eight issues, then returning to write and draw issues 31-50, yet the style, tone and art style of the book remained for the entire run, which is why in my mind it is “John Byrne’s” Sensational She-Hulk even when it isn’t. The art style is beautiful throughout, containing one of my favourite consistent renderings of any character in comics. She-Hulk was drawn with a combination of a clean line comic / pin up style with panels that look like they could be used for tattoo flashes. In part, the pinup style, and She-Hulk’s consistent use of pin up poses, relates to her physical stature in scale with the rest of the world; couches are consistently too short, chairs to small. Readers may look at She-Hulk being flaunted as a female character, yet if you were 7’0” tall and weighed 700 lbs., you would have to bend and contort your body in various ways during your Sunday movie sofa time. 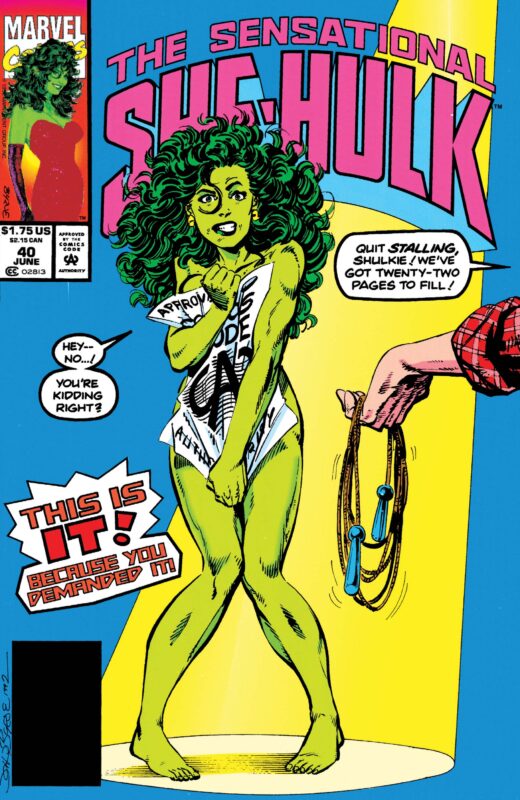 Of course, the self-awareness has led to controversies, including the infamous issue #40 where, because “readers demanded it” She-Hulk is seeming jumping rope naked for the first several pages. It is revealed to be a ruse, as she is wearing a revealing swimsuit that cannot be seen under the motion lines of the jump rope. Besides, as Editor Renee Witterstaetter appears to point out, while hurriedly pushing She-Hulk out of page 6 into panel 1 of page 7 to start the actual story, “Anyone who was dopey enough to think you could be really skipping rope in the nude deserves to have wasted his money anyway!”

At a second reading the set-up is quite clever while, during the en tire jump rope panels, Jenifer Walters (She-Hulk’s not secret identity) criticizes Marvel’s desire for increased sales and catering to readership whims for a story where the main plot involves She-Hulk’s flying car becoming self-driving and launching into space where she reunites with U.S. Archer at the Star Stop Café, because nothing says like increased readership sales like a good U.S. Archer story!

As her passenger Louise “Weezi” Grant Mason, aka The Blonde Phantom, points out, as her and She-Hulk fly straight up out of the atmosphere into space, “You told me Al the Alien said he’s rigged this car so it was capable of only one trip through space. The trip that got you back to Earth after your first cosmic story line back in issue 6 and 7” knowing there would be the continuity fans looking to win there No-Prize for finding a glaring error in a Marvel comic.

Sensational She-Hulk is available as a collected trade, and in back issues, here at Amazing Stories!