DC Future State: The Future Is Now…for Two to Four Issues, at Least….

First off, I was not planning on getting wrapped up in the Future State major DC event. Since 1985’s Crisis on Infinite Earths, the ground breaking crossover epic that set the standard for every major event to come after, I have been rather critical and, to be honest, disinterested in major comic events, reboots, or relaunches. As a young reader during Crisis that was the event to end all events, in my mind, a crossover to change the DC comic universe never to be repeated.

So, when Future State was first announced, I was mildly interested as I assumed it was a relaunch of the major titles after the events of Death Metal (which I found a darkly fun surprise). When I read it was a possible version of what could be DC’s future, my interest waned; I am all in for Elseworld stories and potential futures, but if there is no real bearing on the current universe, especially for only two (or four if you are Batman) issues, I sat on the proverbial fence whether Future Sate would make the “future state” of my pull list. (Yes, I have now decided to work Future State as much as possible into this review!)

As the future date for Future State drew near, I looked into who was writing and drawing and general feel for the series as a whole. Seeing names like Joelle Jones writing and drawing Wonder Woman (please go read Lady Killer if you haven’t already!) and seeing the hero line-up for Justice League, including one of my all-time favourite lanterns  Sojourner “Jo” Mullein, my interest started to percolate. I decided to definitely buy Justice League (I comic I haven’t purchased since the late ‘80s) based on the team as a starting point. Anything after that would be based on the strength of Justice League so the League had to deliver!

When I found out when Justice League was coming out, I went to Amazing Stories to pick it up and read it right away. In a past episode of Punch Radio – every Friday night at 6 p.m. on CFCR radio or as a podcast on iTunes – I had talked about the upcoming Batman Future State with Jace Fox as the next incumbent Batman. Since I had discussed it on air, it seemed only right I pick Future State: The Next Batman, as well….and if I’m grabbing The Next Batman, I should probably also pick up Future State: The Dark Detective for comparison sake…and I leafed through Future State: Green Lantern and it looked pretty cool… Here’s a rundown of the first Future State titles I checked out. . 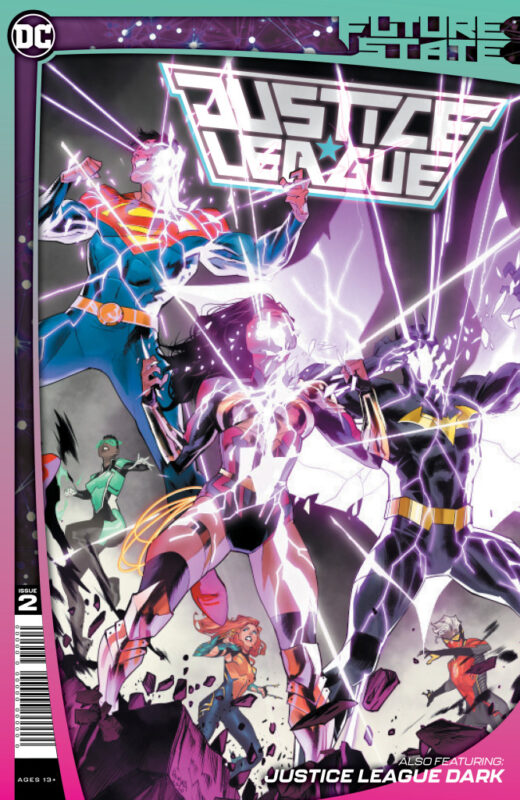 What struck me when I saw the preview cover of Justice League #1 was the team make-up: Superman (son of Clark Kent and Lois Lane), Wonder Woman (Yara Flor), Batman (Tim / Jace Fox), Aquawoman (daughter of Aquaman and Mera), Green Lantern (Sojourner “Jo” Mullein ) and The Flash (future multiverse version). Finally, a creative team solved the “Wonder Woman Syndrome” of team books where there is the single female heroine surrounded by a group full of men. For the Justice League, this is the first I remember seeing a gender equal team (if I’m wrong with the trivia, come at me comic nerds!). Solving the “Wonder Woman Syndrome” I hope is a step that can take place in the present Justice League team and not just the Justice League team’s future.

Getting into the comic proper, the second striking moment is in the double splash page with the team reveal where each character has a small descriptor caption box. Notably, The Flash is referred to with the pronoun “they” which, as far as I know, is a DC Comic first for a major character (again, if I’m wrong, come at me comic nerds!). It may seem like an insignificant step, yet I think it is an important one giving another way for readers’ to identify, or possibly see themselves, reflected in the characters they enjoy reading. In this future (state) the Justice League have pretty much solved the world’s problems and are treated as major media celebrities. The cost for the team is tightened regulations, and JL rules, including keeping the core team limited to six members and team members not interacting on a personal level or revealing their secret identities to themselves. In the meantime, The Legion of Doom are holed up in the abandoned Hall of Justice (nice to see the Hall of Justice throwback) plotting their perfect plan to topple the Justice League. From there, everything goes badly for everyone.

The interplay between characters, in a short story, becomes a pivotal part of the plot; Superman begins thinking the team should expand and have more personal relations to create moral and lead to a more cohesive, less stressed team. Of course, as we learn, it turns out the rules may have already been broken…

Justice League looks stunning with artwork by Marcio Takara with nice clean lines and easy to read details. The second story, Justice League Dark, has Zatanna and Detective Chimp (now possessed by Etrigan aka the Demon) trying to solve the mystery of what is happening to all the magic users who are being systematically killed by Merlin and his army. A fun, supernatural detective story with good character reveals! 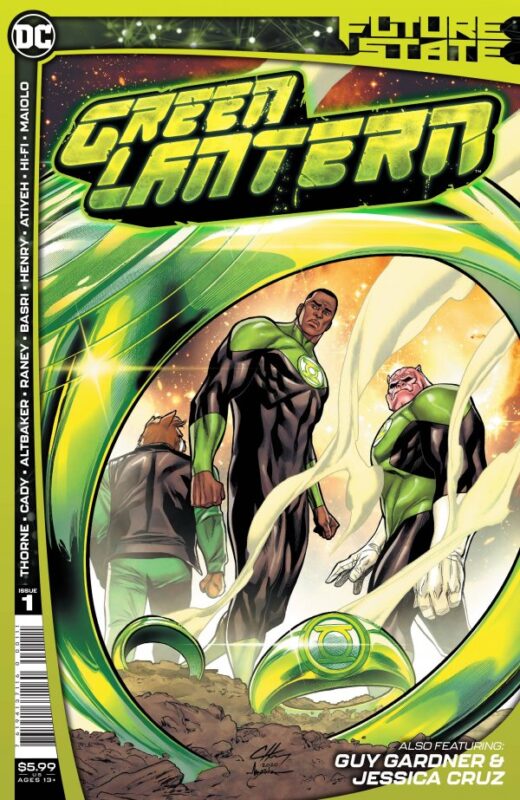 If you are not reading Far Sector, a current Green Lantern title, you should, it is a character driven crime drama that happens to star a rookie Green Lantern on a far-off alien planet. When I leafed through Green Lantern, Jo Mullein from Far Sector was not in it, as she is featured prominently in Justice League, though there was a Jessica Cruz second story, another of my favourite lanterns. The art throughout looked great and, with giving it too much of a read, there seemed to be interesting twists and turns within the three included stories. I put it on my stack with mild curiosity.

The lead story, John Stewart, involves Stewart with a Lantern Corps away team on a humanitarian mission to help the Shaar people, who are being murdered as an offering to the God in Red, to be shipped off their planet. Of course, since it is a comic book humanitarian mission, there is a huge battle on the planet’s surface including many characters being maimed or killed.

The first take away with the lead story is readers learn that the Green Lantern power source is no longer working, here the away team are continuing with their mission to protect the galaxy without the use of their immensely powerful green rings. The art is good, though there are a few odd perspective choices and heavy line choices which weren’t necessary. Out of all the stories so far, this one I was the least engaged.

The second story involves Jessica Cruz being the lone member of a stranded star ship which was supposed to be a meeting place of the Green Lanterns in the sector; she was the only one to show. Her ship is border by a trio of Sinestro’s Yellow Lanterns who, it is revealed, are the new controlling force in the universe. How will Jessica Cruz thwart three Yellow Lanterns without the use of a green power ring? Enjoyable, well-paced story with a great cliffhanger ending!

The final story, Guy Gardner, was the one I had no expectations for as I have never been a Guy Gardner fan; Hal Jordan and Allan Scott were my Green Lanterns and Guy Gardner hit at a time when I just had no invested interest. In this story, Garnder arrives on a planet to stop a death battle between two warring factions on the planet Rerlin where, in mid-Green Lantern authoritative action, Garnder’s ring dies. Now Gardner has to attempt to create peace on this world without using the fallback power of his ring. This story was well-written and quite funny showing the irreverent personality of this misfit Lantern. Great read with a surprise cameo at the end (unless you turn to the back page and look first).

Over-all, Future State: Green Lantern #1 was a solid read and an interesting glimpse into three different timelines of Lantern’s without power. If you are a Green Lantern fan, make sure to put this on your pull list! 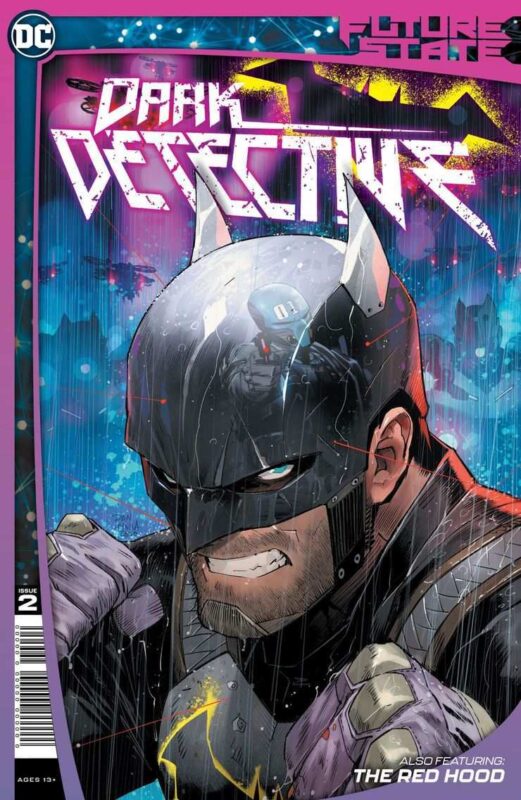 Bruce Wayne and Batman have both been announced dead while Gotham City is being ruled by a group called The Magistrate, a private security company working alongside the Gotham Police Department. Turns out, the Magistrate rules with George Orwellian authority leading a war on crime, and anyone who is wearing a mask.

Bruce Wayne is obviously not dead (non-spoiler alert as it is revealed on the second page of the comic) and is still penniless losing the Wayne estate and fortune. What will Bruce Wayne and Batman do, now that the world thinks they are gone? Plot wise, there isn’t too many surprises thought the execution of the story is well-paced and scratches the “Batman against all authority” itch. The artwork is beautiful and looks like a Batman in a Blade Runner Elseworld story.

The back story is The Grifter spotlight story, a character I never followed from the WildCats to DC migration. The Grifter, who apparently hasn’t been working, is asked by Luke Fox (Tim / Jace / the Next Batman’s brother) to get him out of Gotham, as they are rounding up (or killing) any mask they find, or mask connections (Luke Fox hasn’t been Batwing for years yet is still rounded up for his involvement). Out of all the stories, this one is actually my favourite, a smaller scale story with high stakes, two characters fighting their way out of Gotham, a la The Warriors, mixed with humour and a charming off-beat aesthetic. The Grifter story is part crime, part superhero, part buddy story that works on each level!

All That Being Read: DC Comic’s current major event is a well-written, dare to say enjoyable, look at what could one day become DC’s Future State. Head down to Amazing Stories and catch up on the latest Future State stories!