DCs Mr. Miracle mini-series is a must read for fans of challenging, surreal, and brilliant storytelling.

Comicdom’s greatest escape artist, pacifist/general/warrior, and most beloved New God, Jack “King” Kirby’s Mr. Miracle was introduced back to readers in an impressive twelve part story of heroism, despair, and self-identity, relying on the classic Mr. Miracle mythos with a modern envisioning and an unflinching, all observant, eye.
Taking a new direction, or completely revamping a classic character, can be brilliant (James Robinson’s Starman), not good (James Robinson’s Earth 2), or downright crazy (James Robinson’s Air Boy).Hugo Award-nominated writer Tom King (Vision, Batman) and artist Mitch Gerads (The Punisher), the team behind The Sheriff of Babylon, have created a brilliant, sophisticated reading experience which opens as jarringly as the assassination of Starman in the first three pages of his own title.
This is certainly not your parent’s’, or even my, Mr. Miracle.

Mr. Miracle follows the life of Scott Free, the greatest escape artist who has ever lived, so great he escaped Apokolips and travelled across the galaxy to set up a new life with former fury Big Barda, using his Mr. Miracle moniker to build a career and widely popular TV following, like David Blaine with less mumbling and more colour.
Mr. Miracle has been drawn in the most perilous situations (being tied to a rocket with overly large chains in his first solo comic in 1971) or had crazy Apokolips technology to his aid (anti-gravity flying disks) and it always looked exciting and amazing and colourful and outrageous.This was “King” Kirby’s contribution to DC after creating the Inhumans for Marvel.(The newest Thor movie looks the most like a Kirby comic to the big screen, if you need a reference.) 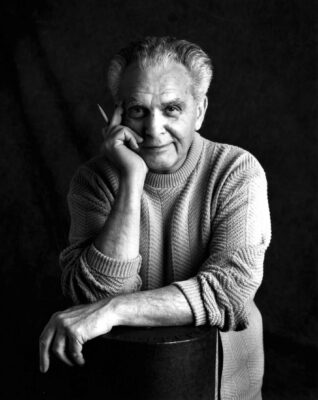 Mr. Miracle has escaped all types of traps and devices, but has he truly escaped death?Will he have to die to truly find out?
Gerards’ art is stunning incorporating various styles to accompany scene changes, flashbacks and memories.Artwork repetition is used for time lapses, with small variances for character reactional impact, and panel borders being manipulated for emotional effect used at key plot points showing Mr. Mr. Miracle’s emotional dissonance and instability.

Or, perhaps, it is a disruption of time?Or is he unknowingly tapping into the Anti-Life Equation warping reality?Or a glitch in the Matrix?
Using the 9 panel a page format, like comic pedigrees Watchmen and Ambush Bug (yes, I put Watchmen and Ambush Bug in the same category, it is the only time it can happen) Gerards creates dramatic visuals to accompany Free’s coping with reality and his reactions to them, while the people around him try to navigate their influences, whether positive, negative, or indifferent.(There is an entire article being developed devoted to the nine panel format someday, so brace yourself.)

Readers see how everyone around Mr. Miracle are trying to cope, or help, however they can, from Bug the Forager trying to get Mr. Miracle back in the never ending Apokolips war, Orion being the “trainer”, “leader”, and bigger jerk than ever, and Big Barda, Free’s wife, who listens patiently to his “memories”, that she does not always recall, being supportive and protective, yet unsure of how to help besides being there, as many loved ones of people with mental health issues often do. 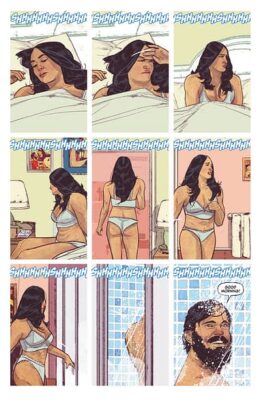 In anti-secret identity manner, Free is completely disheveled, unshaven, and only wears other superhero logo t-shirts in his day to day life, while maintaining the outer appearance of success and happiness for work, taking time to talk with a fan as he and Big Barda have coffee at an outside café.
An adoring fan stops Free and Barda for a selfie and declares “Like, you don’t’ understand.I love Big Barda!” where Barda replies, playing deadpan right down the camera barrel responds, not so much breaking the fourth wall but having a nod to it, “Doesn’t everyone?”
(I would also like to start a rumor right here that DC is developing a stand-alone Big Barda mini-series.If enough people say it, it will become reality, right? Even Michael Cabon, in his wonderful book Manhood for Beginners, discusses Big Barda in length and her influence in young men’s budding adolescence.Not taking anything away from Wonder Woman, but there’s something about Big Barda…)

Mr. Miracle reads as a gritty detective novel, a late-night reality TV show, an epic adventure story, a Jacob’s Ladder scenario, and Birdman or (The Unexpected Virtue of Ignorance) in all its glorious, glossy paged glory.
Has Mr. Miracle escaped death, or is he losing his mind?Tragic, funny, heartbreaking, campy, and violent, strap yourself to a Mr. Miracle sized-rocket and find out!

Written by Brennan Risling, the man behind the counter at Amazing Stories on Wednesday nights.