Some information for you before we begin. This session came about in a bit of a rush. We were missing a couple of our normal players and so decided to run a one-off monster hunt instead of cancelling the whole session (the joys of online!). So, I threw together a few maps that I had in reserve and began the quest for Pookie, an exotic (and highly illegal) wizard pet who had somehow escaped their pen.. 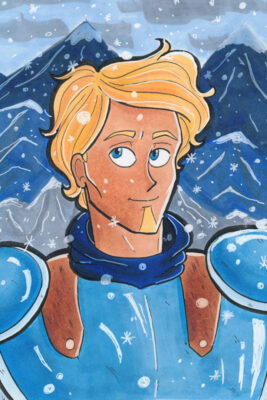 Our noble party consisted of a fighter, a barbarian, and a rogue. Normally we have a couple casters but as luck would have it they were the players who were unable to make it. So the group would be going forward without magical support… or a few pretty helpful skills.
Still, credit to them, they were interested in making a bit of money.
The party members were each given a phial of “oil” that they could use that would identify them to Pookie as friends and give them the chance to end this peacefully. This was good since no pet would mean no pay, because the wizard was fairly attached to her “little bundle of joy who is really not as scary as you’d think”.Just a note- Pookie’s trail of devastation was significant.

As they began tracking the monster, I used some encounter tables to roll up some events that they would encounter along the way. I like to use ones from Xanathar’s Guide to Everything, or if I’m looking for something a bit different there are usually other tables found in various adventure modules.

The party ran into a group of 60 goblins. This was interesting because 60 goblins will beat 3 mid-level adventurers (especially without any casters) through action economy alone (60 turns to 3) and so forced the players to do something lots of DnD players are not used to. Letting Goblins Live. But the Barbarian, who could speak goblin, was so excited to be able to use that language that she decided to sneak up to the group and listen in on their conversation. I had already gotten ready to roll 45 bow attacks and turn our curious barbarian into a pin cushion when something amazing happened. The Barbarian was super sneaky. Both in the approach and in retreating! 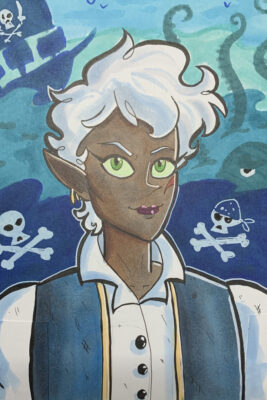 After the encounter, they followed the trail further and further away from civilization and to the edge of a forest. Now as a bit of information none of these characters is proficient in survival, or nature, or anything that might help them when moving into a forest, never mind tracking a dangerous creature. There would be nothing but good things to come of this decision.
As a DM, one of my favorite things is to see players decide to tackle challenges and take on endeavors that they are really unprepared for. Like a custodian looking at the control panel for a nuclear power plant thinking “I’ve got this, how hard can it be?”.
Needless to say the survival and nature checks start coming, and within a little bit the players are lost, alone, and running out of water. I went with lots of checks because nobody had any experience with the outdoors or any kind of proficiency in survival or nature. They then decided that maybe they had probably better focus on living, rather than trying to find a lost pet and worked to find their way out of their situation.And with a couple of good rolls, they found their way out. They made sure to avoid the town and the wizard and any awkward questions.

So how did the players react? With a session that included no combat and lots of rolling at skills they were bad at I was worried that they might not have any fun, or even worse be frustrated about how things were going and the constant failing. But it turned out the opposite happened. They players had a great time constructing the story of incompetence and unpreparedness, using their terrible rolling to build something hilarious.
I really believe that while a DM can set the template and make decisions about the adventures and the sandbox, DnD is at it’s best when the players are also putting in their two cents and using the results of the dice to determine what happens both good AND bad. Nothing is quite as funny as loud declarations of “THIS IS WHY WE CAN’T BE LEFT ALONE” and “I think Pookie is just a false flag operation by big wizardry to get us to do their bidding.”.

So here’s to the players. I can’t say making me laugh will keep you alive, but it’ll be sure to make your end more memorable.

As always, keep an eye out for Mimics.