It’s happened. It has finally happened… I purchased an X-Men comic.

Now, as a disclaimer, I used to love reading the X-Men in the mid to late ‘80s when none of my friends liked them and they were the gritty, anti-hero hero team.
Then came the ‘90s.

Yes, I am fully aware a lot has happened since in the X-verse. Like anything, a proverbial line in the sand was drawn for my hard-earned allowance / comic dollars and the X-Men became washed away from the force of my personal editorial tide… and there were Badger comics to buy! 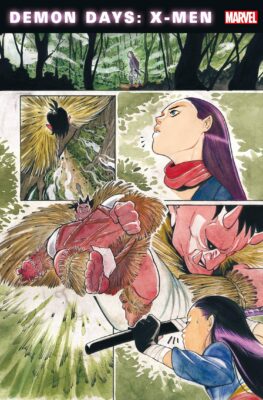 Then, thirty or so years later since Jim Lee’s X-Men #1, Peach Monoko writes and draws Demon Days X-Men #1, a strikingly unique voice in the X-Men cannon. With a soft, water-coloured inspired palette combined with a manga aesthetic, the look was immediately striking for a recast X-Men story.

Demon Days X-Men follows a wandering swordswoman, with powerful psychic blades, who comes across a village being attacked by the powerful Oni hill creatures and routinely haunted by a powerful, larger than life black serpent with huge white, liquid outlined eyes.

Being released as a quarterly, five part series (does the math work on that release schedule?) Demon Days X-Men #1 is an impressive, fun to read, beautifully rendered, debut!

Written by Brennan, aka The Riz, aka Major Party, who holds down the fort every new comic book day aka Wednesdays at Amazing Stories.