Luckily for comic fans, Mike Mignola considered the childhood antics of an action-based avatar hell-spawn’s childhood then took the extra time to turn it into a comic!

Young Hellboy: The Hidden Land follows the adventure of Hellboy, and his “parental guardian” Professor Bruttenholm, who find themselves stranded on a mysterious island – after their plane crashes during a flight to South American archeological dig – fending off giant creatures, escaping perilous quicksand, and encountering other 1940s adventure movie tropes! 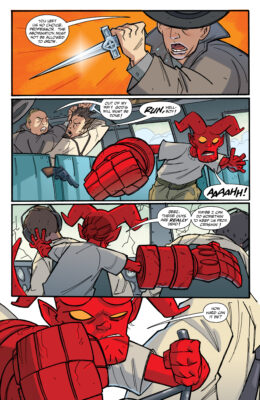 For a fun adventure read with surprising twists, check out Young Hellboy: The Hidden Land and have your unconsidered questions answered! .

Written by Brennan, aka The Riz, aka Major Party, who holds down the fort every new comic book day aka Wednesdays at Amazing Stories.