There isn’t anything quite like a DM campaign book. Packed full of information and various different events, designed to be big giant sandboxes for players to tromp around in and experience. Full of cool facts and lore for a DM to dish out and some really big baddie to eventually defeat. I had the experience of going through the Curse of Strahd book as a player and it was a great experience. However, it also took almost a year and a half to finish.

And that’s the tough part about the campaign books. For the most part groups who’ve been together for years can manage it, but it’s a big commitment asking for a player to commit such a huge time to an adventure. And while there are those of us who make time to carve out an evening every 2 weeks to roll some dice, what about the other players who want to play but don’t have the time for that kind of commitment? I think we may have found an answer in Candlekeep Mysteries. And I for one am super happy it’s here. 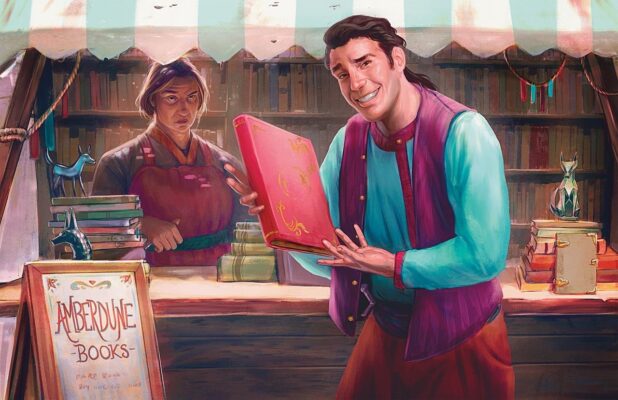 Open up the Mysteries book and you’ll find 16 different adventures based around books as well as a wealth of lore about Candlekeep itself and how it functions, easy enough to pop into any campaign or run as one shots themselves. They are also all written by different writers and as such show a different flavor and style with each one. Some being serious adventures (saving a bard from an evil artifact) to more lighthearted flair (preventing a cult from turning one of the castles turrets into a giant rocket). They are also lined up from level one to 16!

Let me repeat that….ONE TO SIXTEEN! If your one shot group sticks around you can turn this into a campaign itself! Just be sure to bridge the adventures and you’re set (Have the party be “emergency response” librarians? Just an idea).

Looking at my personal collection of adventure modules and different one shots, I can tell you that I have tons of material for levels one to six. And then after that there is a soft whisper of wind from the absolute desert of material for anything until about fourteen. So I am so excited that there is material for all those tricky mid-levels. And with most of the adventure taking place in a variety of demi planes and whatnot so there is little prep to do to set the stage if you want to drop one of these adventures into your home brew world. 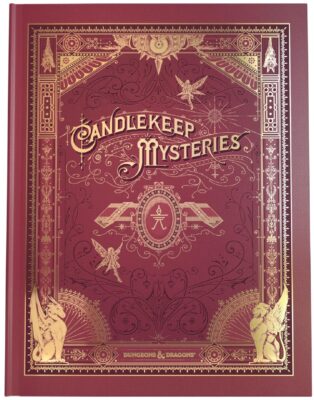 The alternate art cover, on which this review is based, looks absolutely fantastic. Alternate art has been a bit hit (Ebarron) or miss (any of the campaign books) so it’s really nice to see something that looks really neat. Now if only they could have a bit more of a link between the source books and the campaign books so it doesn’t look like a hodgepodge of different colors and styles on my shelves. But those are first world DM problems.

Now, this isn’t all roses and awesome. Adventures are tuned to a player count of 4 or 6 (although I really think that four is ideal, six is just a lot of people to handle) so smaller groups might need some fine tuning in order to balance the combat. There is also no link to any online resources, which during a pandemic which most groups have gone online seems like an oversight.

On a larger note, I’d just like to say that it is a little irritating that in order to get the maps for a book we are required to buy the whole thing again on a platform like Roll20 or DnD Beyond. Is it so much to ask to include a code with the books that gives me a platform friendly copy of the maps for each adventure? I already gave you my money and love your product, but a pull-out poster map seems outdated at best and unhelpful at worst (I don’t like players laughing at me when I try to roll it out on the camera). You don’t need to put the whole thing online, but I’ll be damned if I’m going to pay for the book again just so I can access the online resources. My players tell me they have grown accustomed to MS Paint maps that look like they were drawn by someone in the middle of an earthquake.. 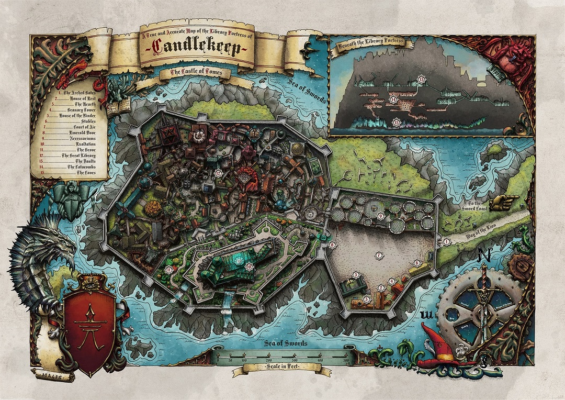 So, should you buy it? If you’re a player you should stay away from this book. There isn’t anything that you can use and you run the risk of ruining a few very fun stories if your DM picks this up. However, if you DM, are thinking of DMing, or have dreamed of DMing this is the book for you. With the flexibility of the levels and adventures, as well as the modular nature of the book, this book will find a lot of use as stand alone one shots or inserts into larger campaigns. It’s really nice to see a batch of resources released that doesn’t require a group to set aside the next year of Tuesdays in order to experience.

If the Forgotten Realms is your jam, this pairs very well with the Sword Coast Adventurer’s Guide. And having a party roll characters using the PHB and this book can definitely give you a very lore friendly adventure.

As always, watch for Mimics