“I can’t walk out on this war. Not ‘til it’s over.”
–Poe Dameron, Star Wars™: The Rise of Skywalker

The First Order reigns. Without the Republic to protect the galaxy, the Resistance is all that stands against the rising tyranny. Determined not to let hope fade, new heroes rally to the cause, joining iconic Resistance leaders in a final stand to determine the fate of the galaxy.

Star Wars™: The Rise of Skywalker brought the Skywalker Saga to a dramatic close with a massive battle above Exegol, and soon you can enter the tense dogfights of Star Wars™: X-Wing in the starfighters seen in this epic finale with the Heralds of Hope Squadron Pack!

Featuring two T-70 X-wing miniatures and an RZ-2 A-wing miniature with bold new paint schemes based on their appearance in The Rise of Skywalker, this Squadron Pack is the perfect entry point for new players beginning to build their Resistance squadrons and veteran X-Wing players alike. Alongside the miniatures, you’ll also find plenty of new ways to customize your squadrons, including six RZ-2 A-wing ship cards and 10 T-70 X-wing ship cards that bring new pilots into your ranks as well as 25 upgrade cards that offer new talents, faction-exclusive astromechs, and more!

Join us today as we take a full look at everything included in the Heralds of Hope Squadron Pack! 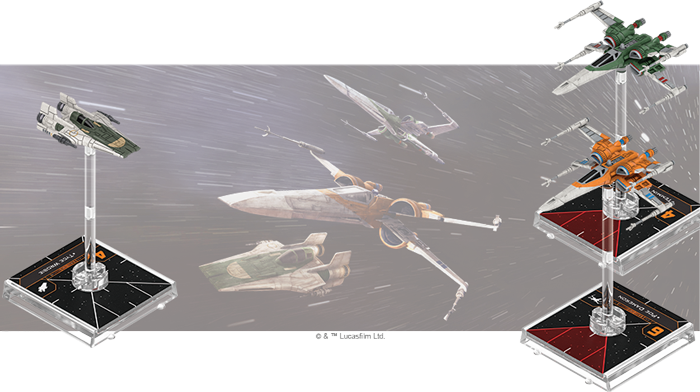 The X-wing is one of the most iconic starfighters in the entire Star Wars saga and remains a powerful symbol of hope in the Resistance’s fight against the First Order. With the Republic decimated by Starkiller base, the Resistance needs every pilot it can find to keep this hope alive in these advanced starfighters.

Answering the call are T-70 pilots of all skill levels who epitomize the best of the Resistance. Inexperienced as she may be, Nimi Chireen  always keeps her hope alive, especially when locked in combat with a pilot who has a higher initiative than her own. She can change a blank result to a focus result while attacking these pilots, even with the weapon installed in her X-wing’s weapon hardpoint, making her a powerful option in the fight against enemy aces.

Alternatively, the T-70 X-wing may not be as elusive as the RZ-2 A-wing, but C’ai Threnalli has the tenacity to survive any encounter. A veteran of several battles against the First Order, he can perform an evade action after executing a maneuver that takes him through a friendly ship, rewarding him with a defensive bonus for pinpoint flying and coordination with his squadmates. Additionally, Threnalli and his fellow X-wing pilots can also use nearby obstacles to their benefit by performing a Backwards Tailslide. Doing so will grant them an extra evade token, but only so long as they clear the obstacle they boost or barrel roll through. 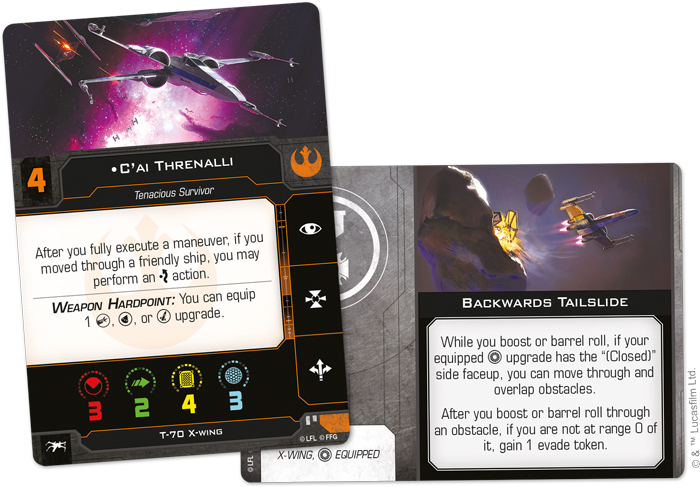 New recruits always perform better with a veteran to guide them and Heralds of Hope also brings updated versions of two legendary Resistance heroes who can bolster their wingmates. Having Temmin Wexley lead your squad can be particularly powerful for a group of T-70s like Threnalli who thrive on performing backward tailslides, giving them the chance to snap their Integrated S-foils into attack position just in time to engage while also giving them a calculate token.

Similarly, once merely a trigger-happy flyboy, Poe Dameron has matured into one of the Resistance’s most valuable commanders and his updated ability reflects this newfound sense of leadership. Rather than just performing an extra red action on his own, Dameron can now grant this opportunity to any friendly ship at range 0–2, helping the entire squadron when it needs it the most. Although this ability is limited to every other round, it can greatly alter a ship’s position, especially if it’s equipped with an Overdrive Thruster that forces it to use a template of one speed higher when performing a red boost, barrel roll, or SLAM action. 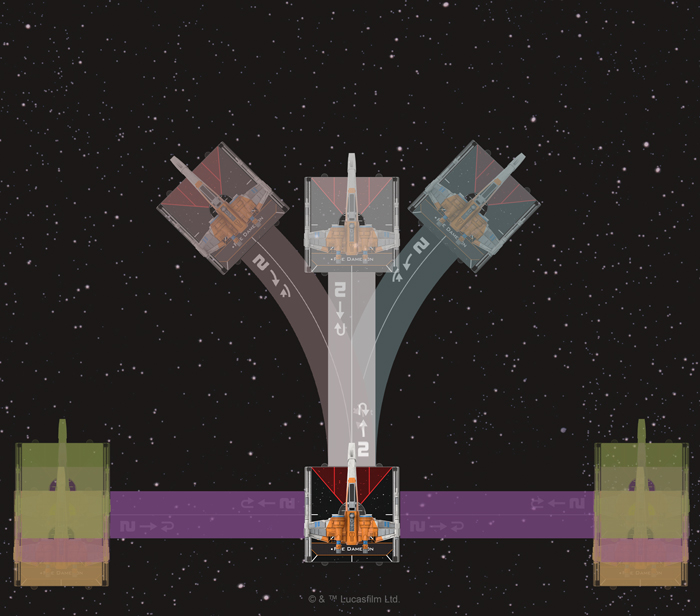 An Overdrive Thruster allows a T-70 X-wing pilot to boost or barrel roll an incredible distance.

The pilots aren’t the only members of the Resistance new to X-Wing, though. The faction also sees an influx of new astromechs in this expansion, none more significant than R2-D2. Present throughout the entire Star Wars saga, this trusty droid reinvents himself again for the fight against the First Order. Here, he helps pilots remove their red tokens at the cost of a shield during the End Phase. Rather than simply leave a ship defenseless, however, can immediately spend two more charges to recover his last shield and gain a deplete token, giving you plenty of ways to manage tokens and shields depending on the situation.

R2-D2 isn’t the only loyal astromech to join the Resistance, either. He is accompanied by Wexley’s faithful  R6-D8, who rewards pilots whose squadrons can line up targets in their bullseye arcs with rerolls during an attack. Droids can be useful in a pinch, but when they really need to fend off an aggressively approaching enemy ship, many T-70 pilots prefer an Underslung Blaster Cannon.  This option for the T-70’s weapon hardpoint is useful for its bonus attack, of course, but also gives the ship another useful option at range 1 if the target manages to slip out of arc.

As the battle with the First Order reaches a climax, the T-70 X-wing isn’t the only starfighter the Resistance uses in this desperate struggle. The RZ-2 A-wing is the choice of aces and rookies alike, who utilize the ship’s extreme speed and maneuverability for a variety of purposes. An ace like Seftin Vanik, for example, is another highly skilled pilot who makes the ideal wingman. Not only does he have the maneuverability to protect friendly ships at any angle, he can also transfer an evade token to them in truly dire circumstances. 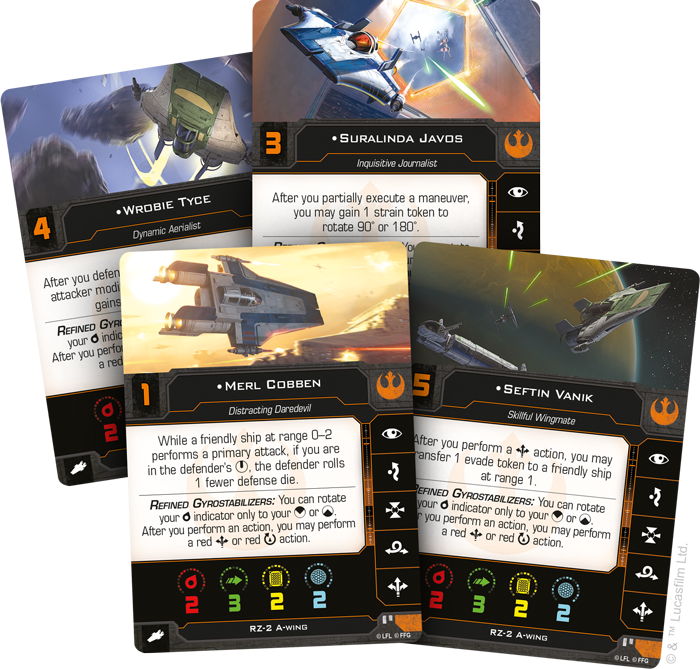 Other pilots prefer to use the ship’s maneuverability in creative ways.  Merl Cobben, for example, can distract even the best pilots with his acrobatics, flying right into their path and making them more vulerable to fire from his whole squadron. Still others push the RZ-2 even further. Suralinda Javos makes the most of partially executing a maneuver, using it as a chance to completely change the direction she’s facing. With some careful coordination, she can even work with a friendly pilot to set up shots that she wouldn’t otherwise have or to cover the enemy’s flight path with a Snap Shot.

Clearly, the speed and handling of the RZ-2 enable its pilots to fly as aggressively as they like and perhaps none are more aggressive than Wrobie Tyce, who is willing to take enemy fire at close range. With this ability, she has no problem performing a Starbird Slash to intimidate an enemy pilot and force them to gain a strain token. Even if she winds up in the enemy’s firing arc, they must choose between modifying their dice or taking a deplete token during any subsequent attack made against her.

New recruits are ready to join the best the Resistance has to offer in the fight for freedom across the galaxy. Can you unite them into a squadron capable of defeating the First Order? Ignite the spark and unite the Resistance!