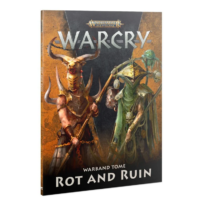 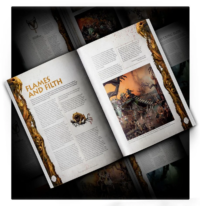 Only the bold dare enter the Gnarlwood, a deadly forest where the very trees uproot themselves to feast upon the flesh of living. The Horns of Hashut are relentless destroyers who worship a fiery deity of tyranny and cruelty. Their god has tasked them with razing the Gnarlwood to the ground, and they will see this done or die in the attempt. Yet first they must reckon with the Rotmire Creed, a deranged cult of plague-alchemists who aim to drown the Ravening Ruin of Talaxis in a tide of filth. These warbands wage a merciless war for every scrap of territory, laying waste to their foes and spreading their own influence through dark rituals and rites of desecration.

Originally found in the Heart of Ghur boxed set, this 64-page book is now available on its own for anyone interested in playing the Horns of Hashut and Rotmire Creed. Packed with background material on the Gnarlwood, as well as both warbands, you’ll find all the rules and profiles you need to play either warband in the carnivorous forests of Ghur.

– Background material and staggering artwork for the Gnarlwood setting and the Ravening Ruin, in addition to the Horns of Hashut and the Rotmire Creed

– A gallery of miniatures featuring fighters from each warband, and evocative scenes of battle on Gnarlwood scenery

– Rules for using the Rotmire Creed and Horns of Hashut, including fighter profiles, reactions, and faction abilities, and background tables

– 6 quests, 3 for each of the two warbands, including artefacts, heroic traits, encampments, and battleplans

– 2 narrative campaign arcs, including one for four to six players split into two teams